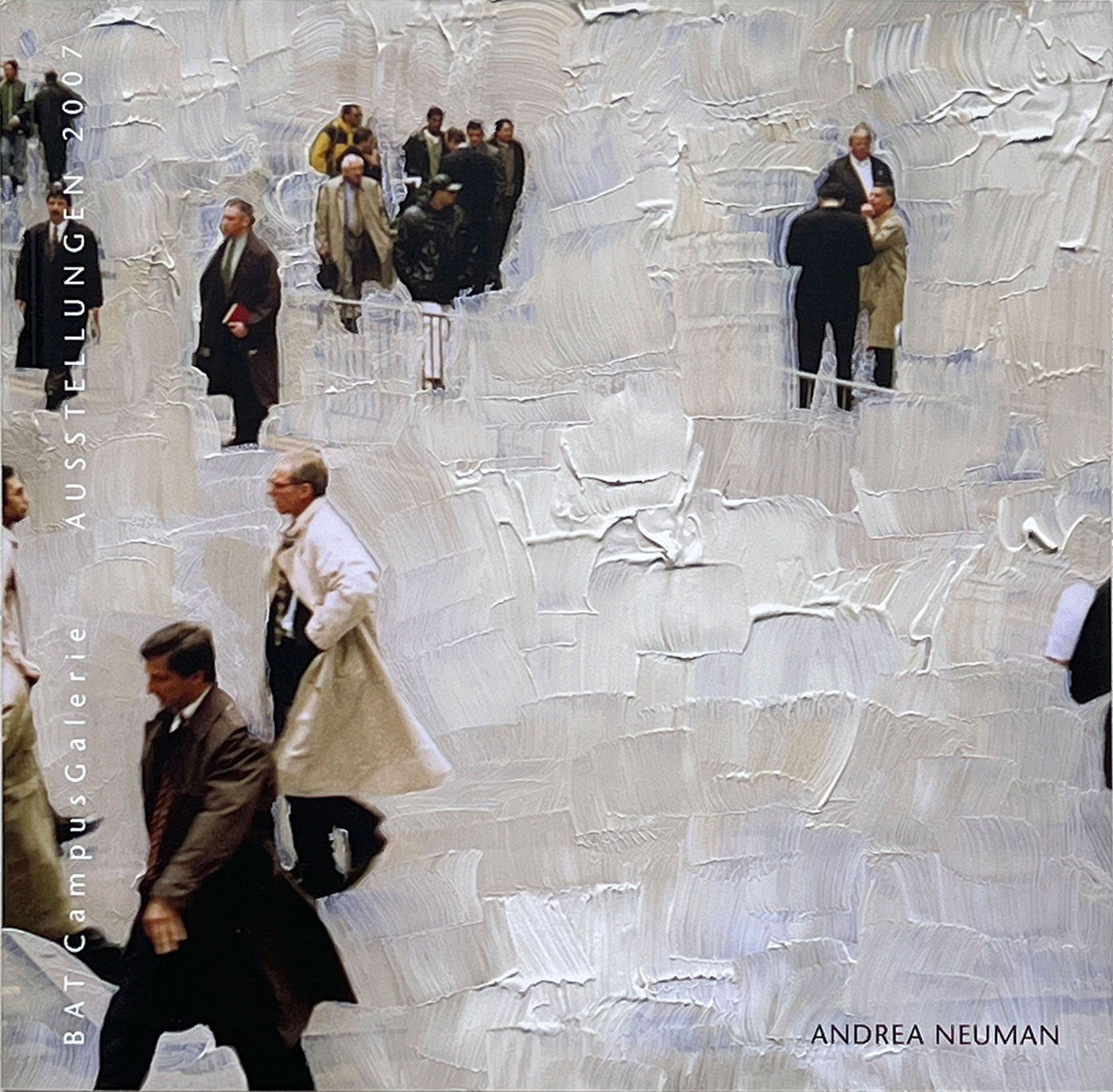 Marching briskly, two people pass each other just a few meters apart. They appear to have made eye contact, but their faces can barely be made out. Only their raised feet are linked together by being aligned along the same axis.

What makes artists different from other people? Surely it is their ability to reveal to us the unconscious, that which has been repressed or forgotten or is present only subliminally – the inner structures of reality. Andrea Neuman plots the isolated individuals in her mostly urban worlds as if on an invisible system of coordinates. Her overpainted photographs draw on a vast and varied repertoire of shots of New York, Berlin, Dresden and even some of Lake Constance, too. Yet what interests the artist is always the people themselves – people in space, people in a building, people in life; the individual lost amid the masses of struggling to wrest free of them. In works as meticulous as they are sensuous, the contours of these individuals and the contexts in which they are captured are reinterpreted by being set against dynamic areas of colour; because „colour is emotion“, says Neuman, who mixes the most diverse pigments with oils to create precisely that shade which is most likely to generate the emotion she is endeavouring to convey. „Areas of colour“, she explains, are „existential experimential space“, which is why her viewers are able to share in the experience conveyed by each of her motifs.

No less important than colour, however, is the surface texture of Neuman’s paintings, which is often grid-like, criss-crossed with a net-like structure, or covered with feathery brushstrokes giving it the appearance of water ruffled by the wind. Here, paint is used as a material that can be sculpted to form a relief that as the artist’s unique imprint lends each of her works its own individual character. Counterpoising the smoothness of the photograph and its illusory proximity to reality are thickly applied oils that cause form and content to intermingle, interact and even counteract each other and so generate tension.

The content conveyed by this complex interaction of the medium of photography and that of painting, of composition and structure, of body and surface, is also highly complex: When Neuman calls a series „Das große Glück der klaren Verhältnisse“ (The Great Good Fortune of Knowing Where One Stands), the effect cannot but be ironic, given the leaden quality of the grey in which the series is cast – be it the sky lowering over the crowds or the ground beneath them resembling dirty snow. The viewer wonders where all these people are going, what it is that is driving them and what they are looking for. Are they still individuals? And what exactly is this „great good fortune“ that they supposedly have? Or did they lose that when they lost their individuality? The viewer senses a profound loneliness, for knowing where one stands in this work seems to mean standing alone no matter how closely packed the crowd is. Neuman is just as interested in sociological phenomena as in philosophy. Again and again, her themes revolve around meaning and existence, memory and the phenomenon of time. This is especially true of the urban scenes she herself seems to prefer: Her images of stockbrokers on Wall Street, of people in public spaces trying – often at the double – to find their way are always about past and future, about ephemerality and the various aspects of the phenomenon of the series and repetition. People’s yearning for meaning and for security in the world is present in many of her works.

Neuman has enlarged and modified her characteristic repertoire of overpainted photographs in recent years. Wheras she often used to spend hours waiting for the right motif, these days, she prefers to actively search for it, staking out her terrain on foot. „Walking is thinking,“ as she once jotted down in her notes. The digital camera she takes with her on her walks sometimes points at the ground for hours on end, recording even the most fleeting moments of her perambulations and hence of her own living time, too. Each walk, in other words, serves also as a metaphor for life itself.

This concatenation of numerous single shots looks rather like a series of film stills: The moving body becomes fluid, losing its contours and becoming a shadow of itself, while the inanimate surroundings – the pattern on the ground made of metal, as is typical of Soho, New York, or of paving stones, as in a small town in Germany – are clearly recognizable and retain their solidity. In these works, the artist becomes more abstract than in the past and at last relinquishes the fixating solidity of oil paint in favour of photography, a medium committed more to illusion than to reality.

Among Neuman’s most recent works are some large format wall installations in which heterogeneous formats generate a sensitive interaction and counteraction of motifs, structures and colours and so, being mutually enhancing, turn pictorial space into experiential space. Here, a comprehensive series of 750 digital photographs installed on a six-metre-long wall creates an impressively structured pictorial space whose picturesque anti-world is a large white square with a dynamically sculpted surface. The effect is reminiscent of the monochrome paintings of Robert Ryman, who once remarked that „the basic problem is what to do with paint“. The works of Andrea Neuman, too, are invariably concerned with paint, rather than colour, for the dynamic surface of her overpainted photographs and pictures is ultimately crucial to the complex overall effect of these most unusual works.